I am overwhelmed and humbled that I get to be a part of the rich tapestry the Lord has woven together. Before He even formed the earth, God planned to join my parents, David and Toni, together in marriage. God decided they should live in Tyler, Texas, and then He formed me in my mother’s womb. After that, God gave my parents two more boys, Cody and Caden. And because of our father’s active involvement and godly leadership, we were all provided with a strong foundation and knowledge that we needed Jesus.

Even though I had confessed Christ and was baptized at an early age, I still experienced seasons in life where my heart seemed to be consumed by selfish desires; focused on what would bring me the most pleasure. I knew there was more to this “Christian thing” than what I had been experiencing and was frustrated by not being able to look at my life and see the evidences of what Christ had done for me.

My time in the spotlight during high school certainly fed my ego and I felt assured that I was destined for a career in acting. But ultimately the applause and encouragement to follow my dreams was not enough to sustain me on that journey because I knew I was only in it for fame.

After graduating from Tyler Junior College, I moved to Denton and began attending classes at the University of North Texas to pursue a Bachelor’s of Fine Arts degree in Communication Design. Looking back, I have no idea what I was thinking. Some say that college is the best time of your life, but for me it was awful. And with that season of my life now in hindsight, I can rejoice knowing that the Lord was disciplining me because of His love for me (Hebrews 12: 3-11).

After I graduated, the Lord took me away from Texas for a series of strange adventures that broadened my perspective of Him and to what He was actually calling me. I moved north, to the freezing state of New York as a missionary with the North American Mission Board. Then I made a plunge, deep south, to enroll as a student at New Orleans Baptist Theological Seminary (but not for very long thanks to hurricane Katrina). After that I had an incredible experience getting to be a part of Veritas, a church plant in Atlanta, Georgia, and then another church plant, back in New Orleans. Eventually God called me home to Denton, Texas, to become rooted at The Village Church, to commend the gospel to the next generation, and to marry my best friend Caitlin. 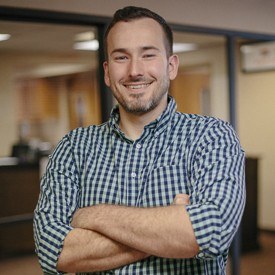