I was raised in a suburb of Dallas and attended Catholic school for almost 10 years. I knew about God and all of the stories about Jesus, but it did not have an effect on how I lived my life. As I became a teenager, sin clearly reared its head in the form of sexual brokenness. And that brokenness led to self-hatred and depression. I lashed out at my family and hated myself. I prayed to God to take my sin away and to make me “normal” but to no avail.

While I was in high school, God saw fit to place some neighbors on our street who were members of a local Baptist church. I befriended their sons pretty quickly, and before I knew it, I was involved at their church. I saw people who loved each other and welcomed me in. They just happened to be Christians. Eventually, I was able to confess some sin to one of the guys at that church, and it was a huge step of faith to tell someone what I was struggling with.

In 2005, I moved to Denton for college and got involved at The Village by joining a Home Group. It was in that group that I really started to learn about the power of confession of sin and experienced a greater knowledge of freedom that is to be found in Jesus. I learned that I could be seen as pure before God. My heart and soul still felt so messy and confused, but I felt safe. I often wish I could say that at this moment or that moment, I gave my life to Christ, but I honestly cannot. I know that despite everything in my flesh, my heart hopes in Jesus Christ, His blood and the redemption revealed to us in Him.

So when God desired to show more convincingly to the heirs of the promise the unchangeable character of his purpose, he guaranteed it with an oath, so that by two unchangeable things, in which it is impossible for God to lie, we who have fled for refuge might have strong encouragement to hold fast to the hope set before us. We have this as a sure and steadfast anchor of the soul, a hope that enters into the inner place behind the curtain, where Jesus has gone as a forerunner on our behalf… Hebrews 6:17-20

I know the Spirit has put that in my heart because the Bible says so. My eyes being opened to Jesus was slow, but it’s clear that God has done that in me, and I know that I want to follow and know Christ!  It is unbelievable to me that I am here, that I have faith in Jesus, and now, as a minister, I have an opportunity to serve the body of believers who has loved me so well. I love this church, and I am grateful to God for you all. 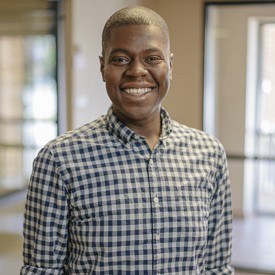