Associate Minister of Operations and Administration

I grew up in a happy and loving home but not one that treasured the gospel. I came to Denton when I was 18 for college and was introduced to the gospel by a girl in my dorm. She took me to a few events on campus that were sponsored by churches and it was the first time I can remember hearing the gospel articulated. The news of salvation from God resonated with me and made sense. I accepted Jesus Christ as savior on October 30, 2003 in a dorm room at UNT.

A week or so after becoming a Christian, my friend brought me to Highland Village First Baptist, which later become The Village Church, and was my church home until The Village Church Denton was founded in 2015.

Both of my parents were in the military so growing up, we moved around a lot. By the time I was 20, I had moved eight times and had lived in four different countries. Though I didn’t know Him, God was creating in me an international awareness that would have meaning once I became a believer.

As I grew in faithfulness as a church member, I was introduced to the idea of Christians living intentionally in other cultures to establish churches and share the gospel of Jesus in places where He wasn’t yet treasured.  I had never heard of that! It was a revolutionary idea to me and one that married my love for the local church, my desire to see others know Jesus, and my experience of living overseas.

In 2013, I moved to Liverpool, UK to serve a church and work with a church planting organization. While I was prepared to live there for the rest of my days, God and the British government brought me back in 2015. 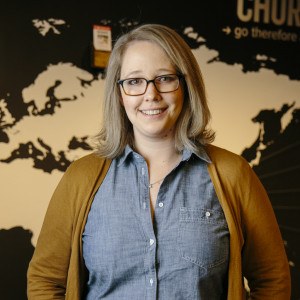